Inside a futuristic control pod, the player used contactless gesture controls to play the game. DefProc was responsible for creating the console and the game programming. As well as making the game COVID-secure, the contactless aspect brought a new edge to a classic game.

We wanted the game to be as fun as possible while maintaining safety standards. The console design meant that players could immerse themselves in the game without coming into contact with others! The nature of the game as a projection also added another dimension to the contactless aspect. The game design was influenced by the various shapes and spaces on the church tower, creating a unique experience for the players.

Along with @focalstudiosltd, @workbenchlpl and @liveveryplay, we were asked if we were actually any good at playing LUX at @lightnightlpool this year.

The short answer?
Not really.

Find out how each of us got on playing LUX: https://t.co/09AOflTZwE

Last year, we collaborated with artist Andrew Small to create Footfall, an interactive wall installation for Bruntwood’s 111 Piccadilly building in Manchester. The wall features a digital waterfall that reflects the life and activity of the building’s entrance. For the waterfall to be interactive, DefProc integrated Unity, an animation software, with computer vision. This means that the waterfall is a physical simulation of the building’s entrance, responding to movement picked up by motion sensors. As people enter and leave the building, the glittering cubes that make up the waterfall are parted by void shapes, representing the people.

In a year marked by workers departing from the office (and in some cases, the city) for the foreseeable future, the installation reforges the connection between people and the shared workspace environment.

We also collaborated with Andrew Small to create an interactive, non-contact piece of art that was recently installed in the Art Hostel, Leeds. It works by having the main controller listen for radio input from a PIR (passive infrared) sensor positioned above a doorway. When approached, the primary controller, responsible for the light and sound input, begins the show! The lights are programmed so that they emit light individually. They also match the ambient sound emitted from the display, pulsing or flashing in time with the noise.

What we love about this installation is that everybody is encouraged to engage with art. The headlights are a familiar object, but the ambient sounds that the display emits transport us to another place, whether that’s a crowded restaurant or an uninhabited forest. The use of contactless technology has allowed this fantastic piece of artwork to become accessible to all.

Back in May, DefProc created two interactives for the National Science and Media Museum in Bradford. The Yorkshire Photographic Union held an exhibition at the museum titled: In Pursuit of Perfection, showcasing the work of talented photographers. Due to COVID restrictions, these interactives needed to be COVID safe and contactless.

One of these interactives was a motion-activated projection, allowing visitors to select the competition categories they wished to view in a hands-free manner. Using a set of custom electronics, non-contact sensors with LED light indicators were constructed, which communicated with a Raspberry Pi controlling the video display.

It was important that the interactive we created allowed visitors to engage with the photography. By using sensors, visitors could control what they wanted to view, encouraging engagement rather than passivity. 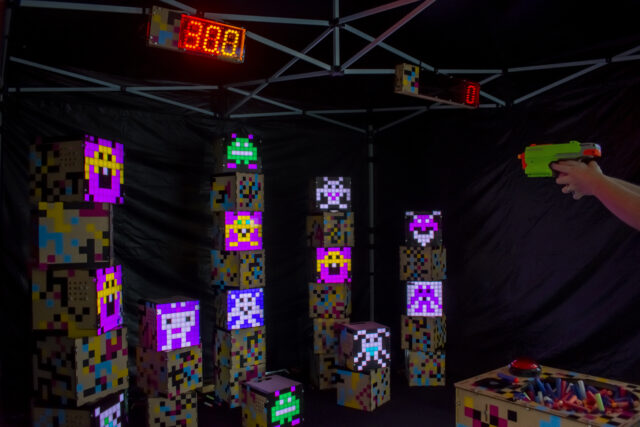 Made Invaders is an interactive arcade game that blends Space Invaders and Time Crisis – designed and built by DefProc!

Players fire at unique targets and compete to get the highest score. To be as immersive as possible, visual and audio cues signal the start and end of the game, reminiscent of a real-life arcade. We also created targets made up of pixelated characters using a 9×9 grid of LED lights. The characters are made up of over 40 bitmap images, converted for use with the LED lights. When hit, the character disappears and a new one takes its place.

To challenge ourselves, we used materials that were as low-tech as possible, such as MDF, duct tape, cardboard, and LEDs. However, low-tech does not mean less fun. Made Invaders also featured hidden cheats, loopholes, and music! Although this was created pre-COVID, we love that the contactless technology used in Made Invaders means that it remains playable under more challenging circumstances.

DefProc is currently working on another interactive contactless game which we can’t wait to talk about! Make sure to follow DefProc on Twitter and Instagram, and connect with Jen and Patrick on LinkedIn to stay updated.

If you’re interested in exploring the possibilities of contactless technology, get in touch with us: contact@defproc.co.uk.