Push to Talk – A technical insight

Since our last update on Push to Talk, a lot has changed. Thanks to funding from the LCRCA (Liverpool City Region Combined Authority) Future Innovation Fund, we have scaled up Push to Talk to a product capable of backing the service we offer. While our challenge to connect people remains the same, we have been able to add new features to the Push to Talk buttons and change how the devices are assembled!

What has changed with Push to Talk?

Previously, the Push to Talk buttons had been produced using laser cutting and 3D printing. On a small scale, rapid prototyping technologies work well — they are affordable and excel in creating complex designs. However, we decided to go forward with injection moulding as we aim to produce Push to Talk buttons on a larger scale and move from prototype to product.

The new injection moulded buttons are made from ABS plastic (Acrylonitrile Butadiene Styrene). Despite the throwaway culture that surrounds plastic use, materials like ABS are robust and live for a long time. The benefit of this is that the buttons can be returned after use, refurbished and reused! Not only is this cost-effective, but it is a crucial step in minimising waste from an environmental perspective. 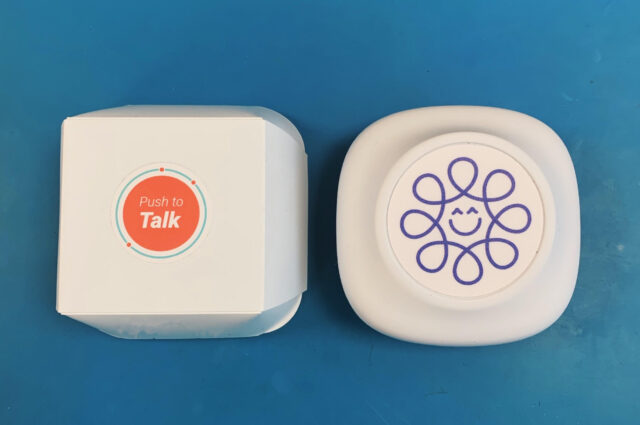 Using injection moulds also means that the production is more efficient; the buttons are sturdy, more refined and have a better surface finish. As well as being robust, ABS is a versatile material. For example, the top and bottom casing are manufactured from the same material but have a different surface finish. The top case is coloured with a white, matte, opaque pigment that is smooth and sleek. Usually, high-end products go for a gloss finish which is a complicated process for injection moulding. However, having a matte finish means that the device won’t pick up fingerprints and dirt like a gloss, adding to its reusability and longevity. The laminated stickers on the top and bottom of the button also keep it fresh and clean as they are difficult to remove. The bottom casing, while also matte, uses a smoked purple colour that is translucent. The smoked texture prevents the user from seeing the button’s components while allowing the lights within the button to be visible. This visibility is aided by the horizontal waves moulded into the bottom casing, directing the light towards the user.

While functionality is our foremost concern, we wanted the device to look like something that could live (and survive) inside someone’s home. 3D printing, while robust, can have voids that make it slightly more fragile than the solid product created through injection moulding. We want the device to last, and injection moulding is the best way to achieve this. 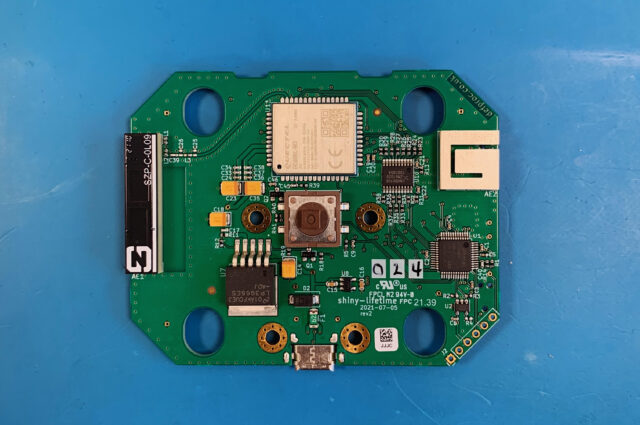 The Push to Talk PCB.

As well as using injection moulding for the buttons, we have outsourced our PCB production and assembly. Previously, it would take one of our engineers around three weeks to create 150 PCBs. While there is nothing wrong with hand assembly, it is only sustainable if you are building a limited number of products. As we were scaling up production, it became necessary to utilise semi-automated services that we could use to our advantage rather than overestimating ourselves. The manufacturer can produce hundreds more PCBs in a much shorter time scale and test them before they’re packaged and dispatched to us. From our perspective, it is more beneficial to have someone else producing and assembling our PCBs. The yield improves, the waste is minimal, and the process is more mechanised and efficient.

One of the most significant changes is that the Push to Talk buttons now use cellular modem rather than LoRaWAN for coverage. LoRaWAN works best using a campus deployment, where you control the signal area where the gateways and devices are located. Unfortunately, England does not have the national support for LoRaWAN like other countries, such as Wales, limiting its accessibility. The device needs to function with only a power socket and a phone line, so an alternative was necessary.

Previously, using cellular modem was expensive and therefore unsuitable for a product aimed at healthcare services and everyday users. However, the data sim card market has since expanded to allow for the increase of IoT devices. The ongoing cost for a data service provider now equates to the cost of maintaining LoRaWAN equipment. By using a cellular modem, the Push to Talk buttons can function anywhere that has a mobile phone signal.

We use a Quectel BG600L-M3 multi-mode module for coverage. This technology change allows for different connection technologies, including a cellular connection. The BG600L-M3 modem also includes support for LTE Cat M1/Cat NB2. This technology is cutting edge while offering a lower cost and lower energy service. LTE Cat M1 is used for mobile phone connections and will replace 2G, so it is a feature ideal for future-proofing the Push to Talk buttons. Similarly, LTE Cat NB2, which is perfect for static devices such as our buttons, is another feature that we could use in the future. To tackle the digital divide, it’s crucial that we have hardware that works well now and will work in the future. Push to Talk aims to have an affordable, accessible device that will function in a regular home setting. By using a cellular modem, this is more achievable!

Where do we go from here?

At the moment, we are in the process of rolling out Push to Talk in partnership with healthcare services across the UK.

We want to be at the forefront of change, do you? Get in touch with our team: contact@defproc.co.uk.

You can also stay up to date with Push to Talk via our social media channels! Make sure to follow DefProc on Twitter and Instagram, and connect with Jen and Patrick on LinkedIn.