How we did it: Push to Talk

In the first of our ‘How we did it’ series, we’re going to take an in-depth look at our project Push to Talk. As experts in sensors and new edge technologies such as LoRaWAN and NBIoT, we’re going to pull back the curtain on the tech involved so you can apply it to your own projects. The insights in this post could be the rocket-fuel your idea needs to bring it to life. We believe the world is better if we share the knowledge we have with other people. So, grab a brew and enjoy this expert lense on Push to Talk.

Why did Push to Talk happen?

Push to Talk happened as we are a consortium partner with the Liverpool 5G health and Social Care Testbed. We worked in partnership with Liverpool City Council, Liverpool John Moores University, Liverpool University, The Royal Liverpool NHS Hospital, E-health Cluster and other SMEs as part of the Department for Digital, Culture, Media and Sport funded project.

Loneliness is one of the biggest challenges faced by health and social care. According to the Campaign to End Loneliness, over 9 million people in the UK say they are always or often lonely — that’s a staggering fifth of the population. A third indicated they felt uncomfortable talking or admitting to their loneliness. The consortium wanted to play an active role in tackling the issue head on.

For local authorities dealing with loneliness, one of the biggest challenges is that the solutions presented are often dependent on the Voluntary, Community and Social Enterprise sector (VCSE). The support available can vary hugely, depending on the postcode someone in need lives in. The need for human interaction is innate and shouldn’t be affected by someone’s geographical location. The project needed to use digital technology to combat loneliness in one of the most deprived areas in Liverpool, Kensington and Fairfield, enabling us to reach people who needed it most.

Simple, yet effective, our Push to Talk device enables people to have a conversation at the push of a button. The device works using Long Range Wide Area Network (LoRaWAN). LoRaWAN is a network that consists of gateways mounted on buildings, they can receive a small amount of data over a long range radio signal from devices up to 2km away. This technology allows for data to be sent from a device to the internet without Bluetooth, mobile data, Wi-Fi or broadband.

Once installed in someone’s home, if someone wants to talk to another person on the network they simply press the top of the unit and they are connected to another person within the network’s community. For the call to connect, they both have had to have pressed their devices. Our first test group was a group of unpaid carers who were often looking to connect but found it hard due to their responsibilities to their dependents. We also worked with a group of independent elerly people who faced similar levels of loneliness, albeit for different reasons.

What were the key features the device needed to possess?

To give you an understanding of how we met the needs of the end users and how we set out to design the device and service, we wanted to share our key features list – 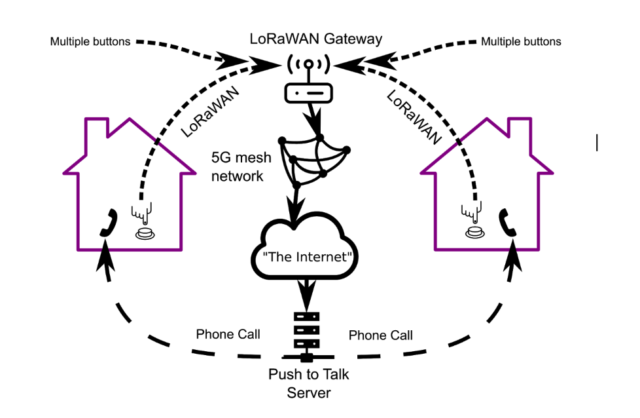 The above diagram gives an overview of how all of the elements of the project worked together. These are the moving parts that make Push to Talk happen. Below, we’ve broken down each element to explain its part in the process.

To create the LoRaWAN Gateway we mounted gateways on buildings and lampposts across the testbed area. The service provider for the gateway is one of the largest, free networks in the world; The Things Network.

We chose The Things Network for several reasons –

Working alongside the LoRaWAN network is the 5G node. The 5G node is connected via an onboard ethernet port, which provides the network route to the internet. To help explain this process, we’ve broken it down below –

Similarly, the gateways have to forward any LoRaWAN packets they receive from the LoRaWAN provider (downlink messages) and send those out unchanged, as the provider has already encrypted those for a specific device that has been calculated to be in range. 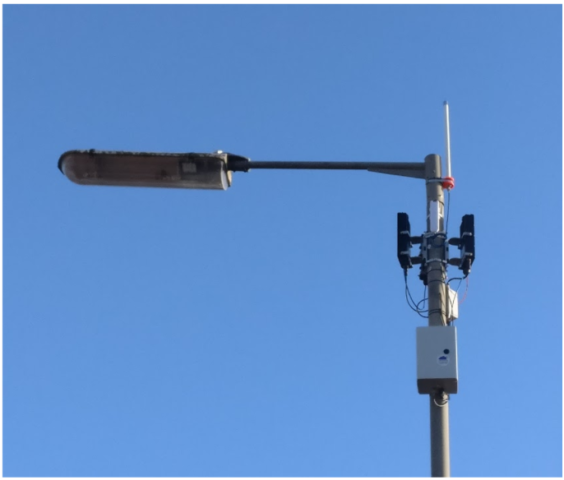 The above picture shows a LoRaWAN gateway mounted with 5G nodes.

As you can imagine, keeping the connection secure and stable was a crucial part for the project to be a success. 5G gave us the  opportunity to provide high bandwidth and a stable connection in outdoor locations, without the costs of digging in wires. Push to Talk enabled us to test if 5G nodes do provide the expected, low latency backhaul required to run stable LoRaWAN gateways.

Working in partnership with BluWireless ltd, Derand ltd and MerseySat ltd, we were able to mount the deployment gateways throughout the testbed area. Together we were able to plan the LoRaWAN network and which mounting sites would give the greatest reach. The gateways presented a number of challenges. During this stage of the project we found that due to the density of the houses we had to add more gateways than expected. And, as the area was low-lying we had to seek the permission from individual buildings to mount the gateways at higher points. This caused delays but eventually enabled us to get the gateway in place and working.

The API server contains the Push to Talk service. The API server connects the phone numbers of people on the network wanting to talk. Twilio provides the call service (as in people stopping and starting calls on the network). The software used on the project is bespoke to our team at DefProc and plays a crucial role in connecting all parts of the tech involved in the project.

To ensure the safety of participants, we wanted to keep phone numbers anonymised. To achieve this, we facilitated calls through Twilio – that way neither participant has the ability to contact each other without explicit permission between the two callers.

A dashboard was created so an administrator could understand the following:

To help get buttons into the hands of those who needed them most, we worked alongside an army of local organisations to make it happen. We have been supported by Local Solutions, The Irish Centre and Irish Community Care, The Hope Centre Tuebrook, Everton In the Community, Asda in the Community, Live Wire, LCVS, Prima Homes, Bradbury Fields and Breckside Park Care Home. Without their support we wouldn’t have been able to make the project happen, we deeply appreciate your support.

What’s next for Push to Talk?

When we started Push to Talk in 2014, it was impossible to predict the times we now find ourselves in. The Coronavirus is the crisis of our generation and we want to repurpose Push to Talk so it can help the thousands of people dealing with loneliness during this difficult time. Read more about our plans to scale Push to Talk and how you can get involved with our cause. Keep an eye on updates over on our Twitter feed.