Things North is a loose association of The Things Network communities spread across the north of England. As an umbrella collective, it is interested in spreading public access to LoRaWAN networks across the wider area (somewhat coinciding with the range of the UK Maker Belt), but it also acts as a nice way of including the disparate communities in the area together under a single banner.

Under Things North, the whole region was entered in to the Big Chip Awards under the Big Chip IoT Impact Award with ttn_liv asked to go along to the ceremony. And I’m very pleased to say that Things North won.

While it was nice to represent the Liverpool area at the awards, getting such recognition for the larger Things Network project from members of the digital industry shows and recognises that there is great value in creating and sharing a community owned, public network for Internet of Things use.

Unfortunately, the number of trophies awarded for each winner is only one, and the decentralised nature of the communities means that there is no good way of spreading that one physical item around all the people and areas that are investing in the network and driving it forward.

Fortunately this is a problem that we can solve with lasers!

I’ve created a replica trophy that can be laser cut from clear acrylic sheet. And — in keeping with the distributed nature of Things North, and The Things Network, — have made he source file available so any TTN community can share the the award.

Of course, if you can build your own award, you can even scale it to fit the amount of trophy space you have available… 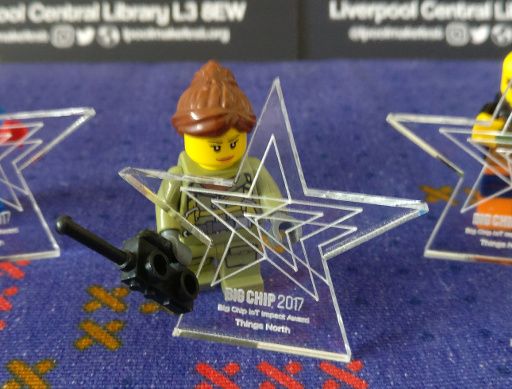