Visible Virals is an art project by Culture Liverpool, DefProc Engineering, Apt Creative and Focal Studios, funded by Arts Council England. The project brings to life the Liverpool City Council Public Health Annual Report (PHAR), highlighting voices from the local community. Between the 7th and 13th of March, Apt and Focal turned quotes from the community into art and projected them onto buildings throughout Liverpool. The projections showcased how people dealt with the COVID-19 lockdowns and how the Liverpool community rallied around to support each other. The main event, hosted on the 23rd of March, marked the second anniversary of the first COVID-19 lockdown. It was here that #WeAreGame was projection-mapped onto the Museum of Liverpool.

DefProc’s role in this project was to create a fun and engaging game that captured Liverpool’s incredible spirit. Artwork and animations provided by Apt and Focal were incorporated into #WeAreGame. We also needed to design and build an enclosure and the game’s controller. It was crucial that the whole experience was accessible, exciting and memorable. 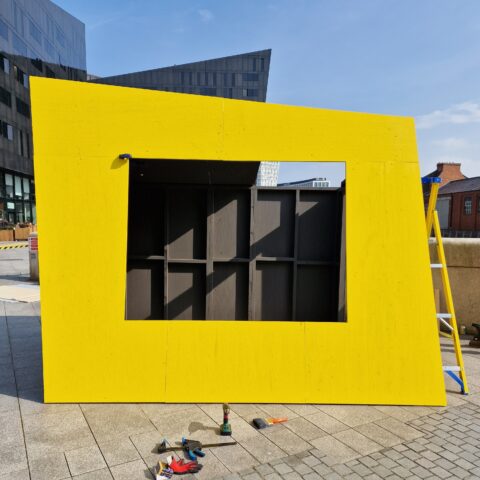 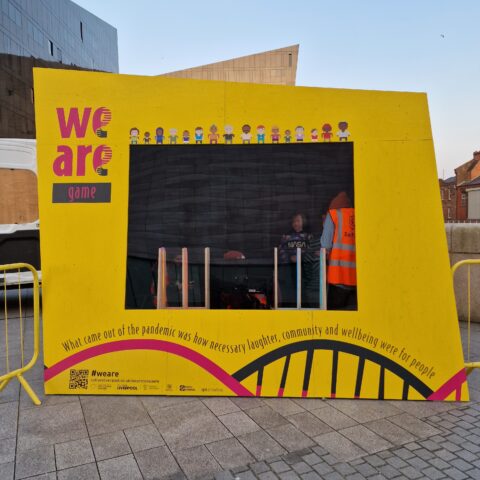 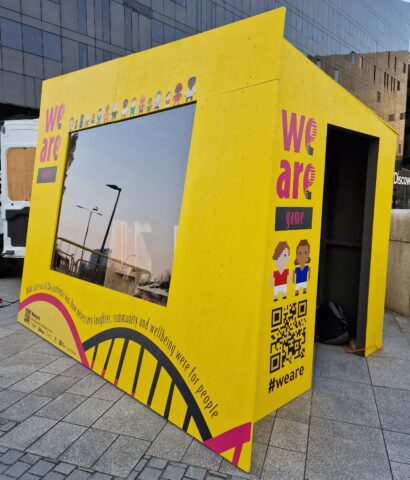 One of our previous projects, LUX, fed well into creating the #WeAreGame experience. It was crucial to design a pod that would safely house the controller and protect players from the weather. However, it was equally important to make the enclosure visually appealing. The pod’s shape reflected that of the Museum of Liverpool and was coloured yellow to match the Visible Virals colour scheme. Vinyl decals were added later, including a QR code so that people could read about the project before they played.

It was a challenge figuring out where to split the panels so that the pod was spacious but robust. It was also key that players inside the pod could see the museum in its entirety, so a ten-degree angle was added to the front of the pod. The slant emphasised the intriguing shape of the pod, so it was practical and visually pleasing! 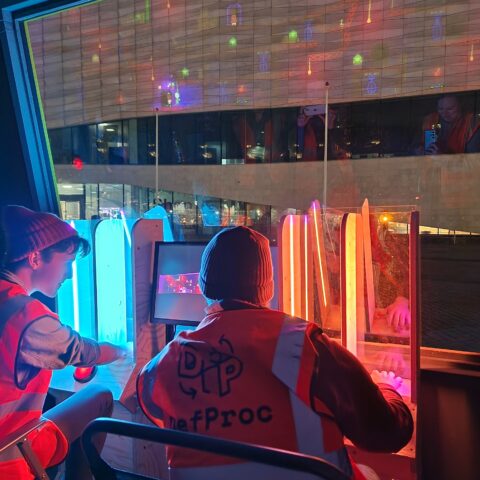 When designing the console, we wanted an immersive experience similar to LUX. The collaborative efforts of people from the community also needed to be reflected in the gaming experience. As a result, the console was designed to be two-player and non-contact to be more interactive and COVID-safe.

Ultrasonic sensors inside the console detected the hands of the player. These sensors work by sending out a high pitched sound wave (that humans can’t hear) and waiting for the sound to reflect. If there is a disruption in the time it should take, the sensors register that there is something in the way. The benefits of using ultrasonic sensors are that they work in dark environments, are low-cost, and provide detection without players needing to touch anything. 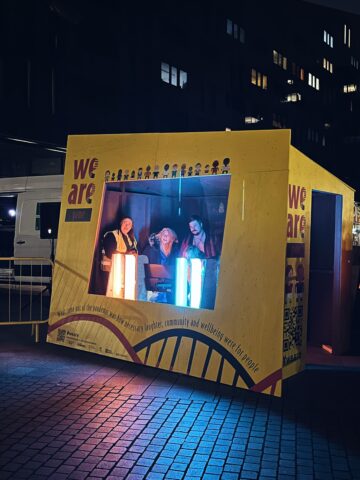 As well as giving the console a futuristic look, the lighting also corresponds to the character on the screen. Due to the game only being sixty seconds, players needed to quickly familiarise themselves with how the console worked, where their characters were on such a massive projection, and how their actions were reflected in the game. Informing players behind the blue controller that their character was blue was a simple solution to any confusion that may have arisen! 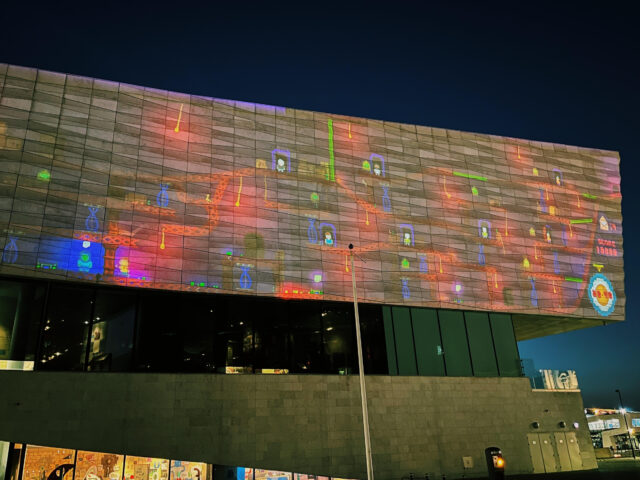 The theme for the Visible Virals project was “It’s in our DNA”, based on the idea that resilience, kindness and community are integral to the people of Liverpool. This, combined with aspects of the city, made up the basis for the elements within the game. Players were randomly assigned to play as a local community figure and had sixty seconds to collect objects and deliver them to NPCs. Players could also pick up messages featured in the PHAR for bonus points. At the end of the game, some of the messages show on the side of the museum.

Communication was crucial for players who wanted to aim for a high score. To pick up the most objects, those with the highest scores realised the need to utilise the entire landscape. If players stuck together in one area, they could not collect as many objects, ending with a lower score. However, even if players didn’t pick up any collectables, they still earned points. The ultimate message of #WeAreGame was that everybody, no matter how small their actions, made contributions that kept Liverpool’s community spirit intact throughout the lockdowns.

Projecting onto a Liverpool landmark meant that the game’s design took into consideration the shape and curves of the museum. We were also mindful that it would be displayed during the evening. As a result, we played around with heavy light intensities to decide which colours would be most visible to the players inside the game pod.

Accessibility was also a priority. The console had to be easy to use and the game needed to be engaging and simple to understand. We gave a classic feel to #WeAreGame so that it was reminiscent of a traditional arcade game. As a bonus, we added easter eggs for players to find when they jumped in hard-to-reach areas! Teasing players with the current high score and hidden easter eggs encouraged them to return for another attempt.

#WeAreGame was a huge success. It was thrilling to see people immerse themselves in the Visible Virals project. We would like to thank Public Health Liverpool, Arts Council England, Liverpool City Council, Culture Liverpool, Apt Creative, Focal Studios and the Museum of Liverpool for their involvement and collaboration.