In the 1970s and 80s shooting galleries that used simple light detection were everywhere. The rifle would emit a simple pulse of light, and if that light happened to strike a sensor it would trigger a sequence of automated actions, typically involving sound a simple movement of mannequins. This humble game was brought into the 21st century using microcontrollers, Raspberry Pi and wireless radio communications. But why was it made and what did it take to bring it to life?

Made Invaders was a research and development project that was created to showcase the skills and talents of the makers that make up DoES Liverpool. Costing £1000 this project came to life as we wanted to create a another large project that would accurately show the diverse skills that DoES contains. We worked on electronics, laser cut construction pieces, player registration software, vinyl art decoration. All of this was made possible thanks to the makers, hackers and artists that make up our community at DoES. 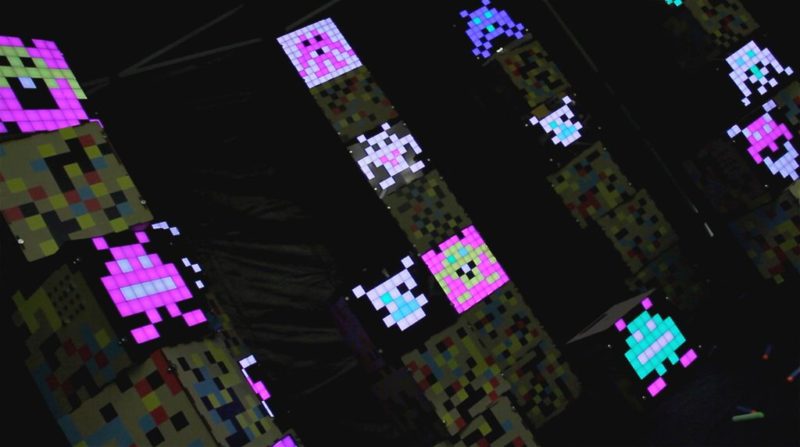 Made Invaders is a real life, full size shooting range, a cross between Space Invaders and Time Crisis. Housed inside of a 3㎡ enclosure we have a firing range full of reactive targets designed and built using a laser cutter and housing electronics that react to impacts and display digital explosions. Players receive 30 seconds to hit as many targets as possible using safe foam darts, enabling even young children to play safely.

To control the game there is a main controller, housed inside a custom laser cut frame, which uses the radio module from a Low Power Labs Moteino MEGA microcontroller board. The Arduino IDE was used to program the Moteino and the targets, a widely supported application with an extensive community of makers, artists and hackers. The Arduino platform is used throughout this project to power the controller and targets. We also have a Raspberry Pi running Node-RED, a visual language that uses a flowchart type interface to connect devices across a local or worldwide network. The Raspberry Pi is used to power a registration system, enabling the player to start the game by entering their name and Twitter handle, which is then linked to an RFID tag and used to uniquely identify the player and ensure that their score is recorded correctly. Once ready the player will hit the start button, triggering 15 targets to life and setting the countdown timer to 30 seconds. The countdown timer and the score display each have a Moteino inside and drives a series of 7 segment display to show the game time and player score. To signal the start of the game we play a quick piece of audio and then the players are ready to fire! After 30 seconds of action, involving many foam darts being fired, the player’s score is displayed and the player’s receive a tweet containing their personal score. We even added the facility for players photographs to be taken, and while this feature was fun, we found that players weren’t as interested, so we pulled it from the final version.

The targets themselves are pixelated characters created using a 9 x 9 grid of LED lights. The target characters are created using over 40 bitmap images that are converted for use with the lights. This gives the player multiple targets that change when they are hit. Inside the targets we have a custom printed circuit board (PCB) which replicates some of the Moteino functionality, using a compatible microcontroller and an RFM69 radio module used to send data over packet radio to the main controller. The connection from the controller to the targets is completely wireless enabling easy transportation and storage. The PCB also has an SD card slot and a connection for the grid of LEDs. To register an impact we use a piezo element to detect the impact, generating a slight increase in voltage which is then manipulated to create a pulse so that the player can “see” the impact in much the same manner as a drum sensor operates.

This superb project was made possible thanks to the hard work and dedication of those that make up DoES Liverpool. If you would like to know more about DoES then come along and say hi. If you would like to have a go on Made Invaders then keep an eye on our Twitter account @MadeInvaders to see where it will pop up next.